Last night I went to the opening of the Lockwood Print Group's exhibition Fur, Feathers, Fingers and Fins at the Lewis Elton Gallery at the University of Surrey, Guildford.  The Group all attend Lockwood and meet one day a week with Julie and Annee in the studio.  They have been working very hard over the last few months and with the help of Lindsey and Tina as well have produced some lovely and  humourous works of all sorts of animals, fishes, birds as well as their own hands.

The Mayor of Guildford came to open the exhibition and was particuarly taken by one screenprint, entittled 'Teddy made me do it '.  For me I think I most enjoyed the nodding reindeer heads on the back wall, each individually coloured.

The exhibition is on for the next couple of weeks, I recommend a visit if you can, the joy of the artists making the work will leave you with a smile on your face.

Information on Fur, Feathers, Fingers and Fins
Posted by Emma at 21:55 No comments:

Have you discovered Room 90 in the British Museum? If not now is a good time to go while they hold the exhibition Out of Australia.   Room 90 is the Gallery where the Museum display Prints and Drawings from their own collections and they usually have at least two differently themed exhibitions each year.  This current exhibition covers works from 1940s to the current day from both indigenous and European descended artists.
From a personal point of view it is the work of the indigenous artists that is the most interesting.  As you enter the gallery there is a large aquatint called Untitled (Leaves) by Gloria Tamerre Pertyarre.  It has a glorious rhythm and movement to it as individual small brushstrokes represent leaves on the wind.  It is this striking handling of pattern within such works that has always fascinated me; there is a dynamism and fluidity that bring them alive.
A colour aquatint entitled ‘Fire Dreaming at Yanjirlpiri’ by Paddy Japapaliarri Sims strong orange and red elements that shine with an intensity that is not often seen in such a print and well worth a closer look.
The exhibition also shows some of the transition that European descended Australian artists followed from the 40s, when you have to remember that access to other styles of western Art was very limited.  Travelling to Europe would take four to six weeks by boat and so many Australian artists would spend a number of years abroad to explore and learn about the leading forms of Contemporary art.  Some would spend most of their careers, based in Europe and in particular London.  It was perhaps not until the 70s that Australian artists did not feel the same need to spend so long abroad to be part of the wider art world.
An artists whose works I had previously seen in Room 90 was Fred Williams, he spent 5 years in London during the Fifties.  When he returned home he saw the Australian landscape anew and it changed the direction of his work from realistic figurative pieces to more abstracted landscapes making a strong use of marks, which still look remarkably fresh.
Two other personal favourites were drawings by Brent Harris from 1999.  They are studies for large paintings.  Silhouetted forms are fluid and dripping and play with negative and positive space.
So remember Room 90, there are always fascinating works to be found.
Posted by Emma at 19:12 No comments: 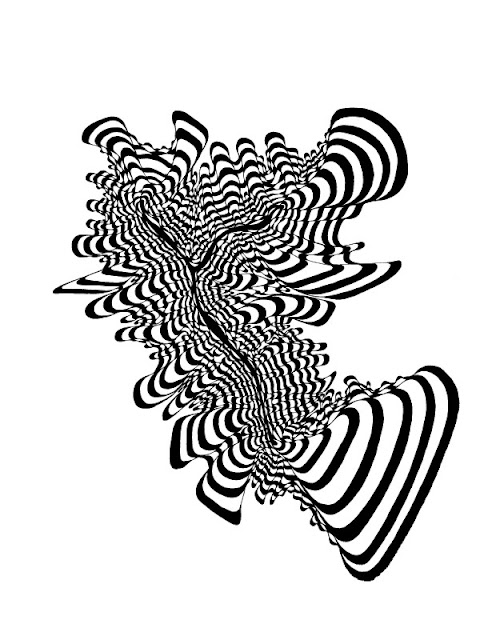 I have had a couple of weeks away from the studio visiting Dorset.  A time that allows me to draw and while away I completed a couple of larger drawings in the new style that I have been experimenting with recently.  Instead of using just single thickness lines I have been working with variable thicknesses.  Before going away I had made a small drawing and transferred to a screen and experimented with some different colour ways. 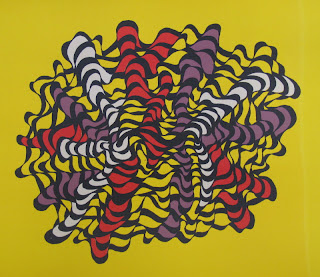 The two larger drawings are the first I have done at this size (paper 56 x 76 cm) which allows more scope for experimentation with the form.  I’m still not quite sure where they are going and will need to do a few more drawings yet.  This is part of my process, from each drawing I learn something new and start to incorporate that knowledge into the next drawing and so on.   For my degree show last year I did over 20 drawings to reach the final five that went on show, from each one I learnt something new. So with this type I still have a long way to go.
In the meantime I have also been trying some miniature versions that I am just starting to print, hopefully to have some work to submit to the British Mini Print competition in September. If anyone has thoughts on them, please make a comment 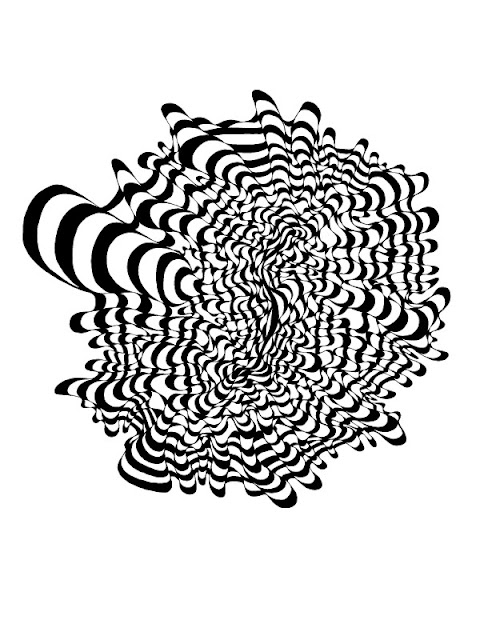