Tuesday was the last night of Richenda’s course on the Goetz Technique, an opportunity to try and perfect our inking techniques under an experienced eye.  The inking of the plates is perhaps the most critical aspect affecting the final results of the print.  It is easy to take too much away and lose the richness that is possible, while equally being too timid with the wiping does not allow you the full range of tones that may be possible.
The technique is particularly suited to people who have a painterly style because of the range of tones that can be achieved.  However I still found the results interesting for my fairly graphic approach to work, particularly the depth of black that can be achieved over an area.
I had prepared a few small plates to print from for Tuesday but did not manage to print them all that night and so finished them later in the week.

The course proved very popular with all who participated so don’t be surprised if it appears on the calendar again sometime.  If you fancy trying something different give it a go.
These two images  were my first prints of the night, the left one is just carborandum and the right one is drypoint. Then I combined into one print below. 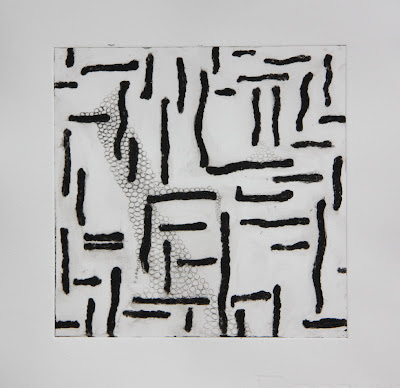 Didn't get this one quite right, not enough ink within the drypoint areas.  All the work is on one plate and it does make it a touch harder to ink and wipe properly. 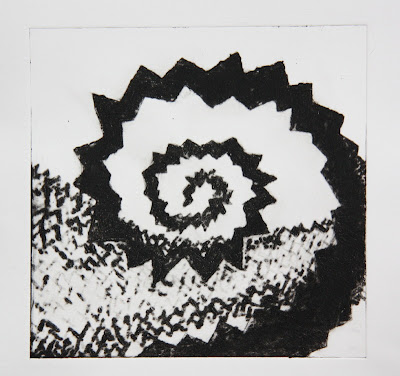 I was happier with this one, the spiral was all with the darkest range of carborundum and then a mix of light and medium tones for the other areas.  I will certainly be exploring these further
Posted by Emma at 18:39 No comments:

So Tuesday night was the second evening for Richenda’s course on the Goetz Technique.  She stated with a demonstration on how to ink the plates we had painted up last week.  Intaglio ink is used but differently from inking up an etching plate.  Rather than spreading and pushing the ink into the lines, the ink needs to be dabbed onto the painted areas of the plate.  Excess ink is then removed by placing old newspaper over the plate and pressing onto it to lift it off.  This needs to be repeated a few times, if the white of the paint becomes visible then a bit too much ink is coming off.
You can’t use scrim as you would with an etching plate as this runs the risk of pulling away the carborundum and then pushing it over other areas of the plate and scratching it.  Once the excess ink is removed from the painted area, then tissue paper can be used to carefully wipe off any additional ink left on other areas of the plate.  How much of this is done partly depends on how you want the final image as it will affect the lighter tones on the print.
So I inked up the carborundum plate and printed it with the result below. 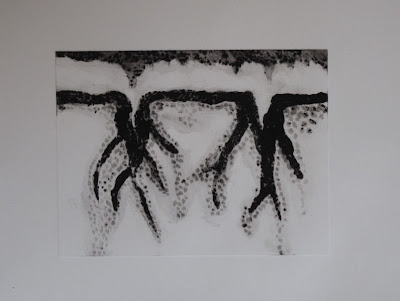 The top region used the medium carborundum mix, the central bit the darkest and the spots the lightest.  As you can see a real variation in tones is possible.
I then inked up both the plate I had and printed them, with the dry point first followed by the carborundum plate. 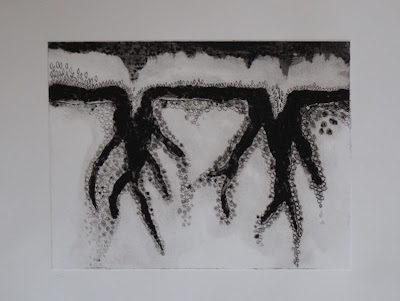 This image with both plates is for me the most interesting, as it has a bit more detail, but other members of the course were achieving some very effective images from just their carborundum plates.  You will notice some tonal difference between the two images above, this is because of the inking and wiping of the plates varies slightly.  The first one had a bit more ink removed.
I had a third plate from the week before and decided to try this with two different coloured inks.  The nature of the image made this reasonably straight forward with just a little care where the circle is close to the line, not to wipe one colour into the other.  A bit of a stark image but it does show the density and richness of colour that is possible by this technique, which you don’t always get with an etching. 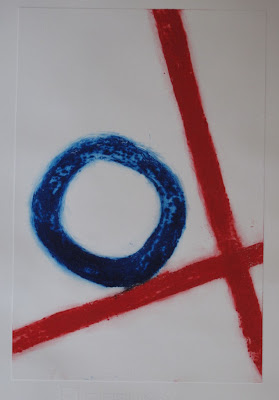 We have been given a couple more plates and carborundum paint to prepare for next week’s class.  So I have some homework to do now.
Posted by Emma at 18:55 No comments: