A New Year and this week the studio has been fully active again, with new screenprinting and relief printing courses underway.  Preparations are also taking place for an exhibition next month at the Cranleigh Arts Centre.
After a few weeks off it was good to get back in the studio and carry on working on the monoprints that I have been experimenting with.  In the week before Christmas I had started to print on some canvas.  The differences from paper are subtle but noticeable.  It takes more of the ink than paper but I have found that it is necessary to print a bit firmer because the texture of the canvas means that a light touch results in missed areas.  So it is a fine balance between pushing firm enough to transfer the image, and not too hard resulting in the ink running further than wanted.
The first canvas I tried was quite a coarse weave so I have also tried a finer weave as well which does hold the details better.  The primer on the canvas also seems brighter than the paper I was using so the quality of the colour changes as well.  All of these factors can make quite a difference to the overall print.
Having finished the first couple of prints on the canvas I have also stretched them on to canvas.  The end result is very satisfying as they create an interesting perceptive twist.  The monoprinting style shows that the ink is brushed on, but the actual printing creates a flat surface.  Being on canvas as well then makes it quite hard to see if the image is printed or painted.
I have been working simultaneously on paper and canvas with similar images, I know its hard with a photo but see if you can tell the difference.   Overall I feel the canvas prints are stronger and look forward to trying some on a larger scale. 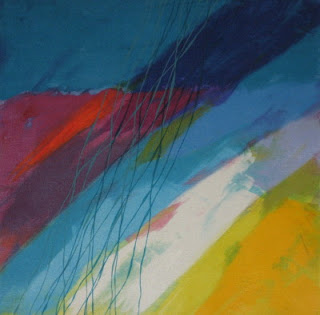 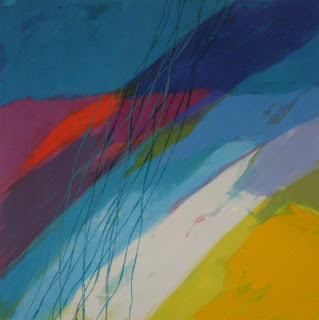