After my miniatures, I thought it was time to be more adventurous with some larger pictures.  These images are 54cm by 42cm, so not huge but quiet a step up from before and do present some more interesting technical challenges.  You have to be quite swift in applying the paint, so not to have problems with paint drying in the screen, and firm with the squeegee when printing not to miss areas, but it comes together after a few goes.  So far I have been using two drawn images in the foreground which have blends in them though on one run it ended up looking like a single colour.  These are the effects of the combining layers of paint sometimes balancing out.
I am enjoying the monoprinting side as it is very free and interesting accidents happen along the way as the paint moves on the screen.  It is all a learning process at this stage particularly with the colours.  In particular I’m interested in seeing how the two layers of changing colour enhance or distract from the movements already present within the drawings.  See what you think. 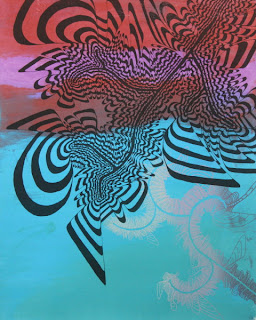 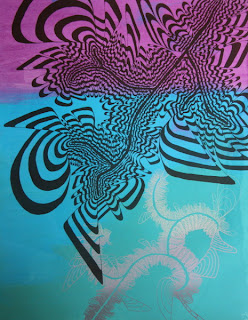 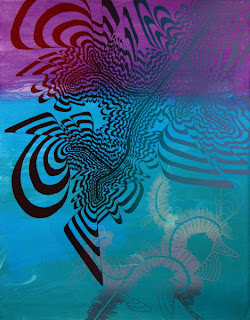 Last night Hugie O’Donoghue gave us a wonderful talk about his some of his recent paintings and prints.  He is primarily known for his large figurative and abstractive paintings that explore myth and identity.  He showed some paintings that had recently been on displayed in Prague and one that will be at the RA next summer.  He explained how he felt that working with the figure it was important that the work should be life size which is why so many of the canvases become so large, one was about 16ft by 8ft.  In the photo he was standing next to it and it really emphasised the huge physical effort that must be involved in making such works.
He then moved on to some of his print works, starting with another large piece from about eight years ago, a crucifixion triptych.  This was also large scale with each section being 8ft by 2ft.  He described how he encountered working with carborundum (in a manner similar to the Gotez technique) to make these images.  Compared to direct etching he felt it offered a more painterly approach.  He also liked the way that if he made a mark and then corrected it, because the medium was drying evidence of the first mark remained, showing traces of his thoughts. He also liked the method as it allowed him to work on the plates in his own studio rather than in the printing studio.
He then showed a set of colour prints based on the lives of people from the West Coast of Ireland where his mother was born and a region he still has ties to.  These images were much smaller and a few had been lent to us to show at our Summer Exhibition.  Having seen them earlier in the year it was interesting to learn more about then as they had a great intensity of mark and colour.  While smaller, about 1 ft by 2 ft they still were life size in that they had a close up head in the image.  Hughie described how he would draw one plate, with the carborundum for printing in black, and use a second plate for the application of colour.
Finally he showed a series of monoprints that he produced during a 2 week stay in Venice with printer Simon Marsh.  During that time they were producing up to 10 images a day, adjusting and reworking plates to refine the images.  On arrival he noticed a sculpture near where he was staying of a figure carrying a drum, while carved in stone it had a metal nose, and he used this head as a starting point for many of the earlier prints.  Later also being inspired by graffiti he discovered nearby.  It was interesting to see the development of these sequences of prints as areas were wiped away or strengthened as the images progressed.
An excellent evening I feel we were privileged to encounter an artist who has evidently pursued a career producing work that is highly important to him rather than being swayed by current fashions and in doing so has created an extraordinary body of work.
Posted by Emma at 11:23 No comments:

Well I have been playing again, sorry testing new ideas, but it is a form of play really.  Trying out blends and monoprinting on the screen for some backgrounds and then overlaying some drawings to see how they interact.
Both the blends and the monoprints give unanticipated results.  Though you may be aiming to achieve something, until it is actually printed through the screen you cannot be completely sure what will arrive.  The blends are more predictable, but even then surprises happen.
The monoprinting from the screen provides quite a painterly result that I would never be able to produce by directly painting.  It is achieved by lightly brushing ink onto the screen before printing with the squeegee which inevitably moves some of the ink as it passes over.  Hence some of the unpredictability.  However that is what makes it all rather exciting and unpredictable.  I’ll have to try some larger ones next.
Using mirrored versions of the same small drawing and then overlapping them also produces some fascinating results and new conversations take place between them and different images appear. 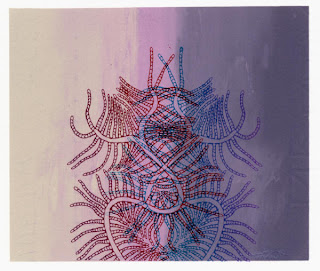 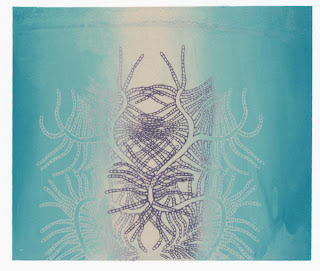 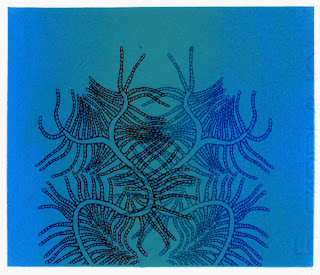 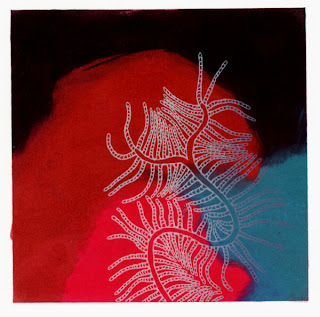 On Saturday we were treated to a wonderful talk from artist printmaker Nana Shiomi.  Nana came to the UK in 1989 to study at the Royal College and has lived here since then.  She described how in Japan she was always fascinated by the Western Culture and arts but once here could not quite find a way to fit.  It was whilst taking lessons in Japanese Archery in London that she realised that she did not need to reject her Japanese roots but use them and incorporate them with Western ideas and in doing so has created a unique body of work.
They reflect the similarities and the differences in the two cultures and Nana has created a very personal and individual visual language.  In a similar way she uses traditional techniques of Japanese woodblock printing but has amalgamated them with her own more contemporary methods.  Her prints use both relief and intaglio wood blocks to produce the final image.  For her the philosophy of printmaking and the reversal of the image are a crucial part of her practice and many of her images incorporate mirror images.
She showed us many of her prints and had also brought along the four blocks and step prints showing how a final image was reached.  This provided a fascinating insight into her methods which she described as simple but as we all know, that only comes from years of development as practise.
An inspiring and fascinating talk, thank you Nana.
Don’t forget we also have Hughie Donaghue coming to the studio on Thursday 20th October
Posted by Emma at 10:21 No comments: