Mottisfont Abbey is a National Trust property near Romsey in Hampshire.  A few years ago they converted unused upper rooms into a gallery and since then they have been showing a range of interesting exhibitions.

This month they have an exhibition called Open Spaces, which includes one of my recent larger screenprints.  This is an exhibition of selected works from an open submission, the selectors were, Tim Craven of the Southampton City Art Gallery, Jo Bushnell, the Director of the Aspex Gallery in Portsmouth and Alex Hoare the Arts Development Officer at the Test Valley Borough Council.

So I’m really pleased that one of my works was selected and will be on show from 28th September – 17th November.

A Bit of Play Time

Recently I have been experimenting with a new set of screenprints.  Three different drawings, layering over each, in different orientations and different colours.  This is always a fun way to work as such different results can be achieved in a short amount of printing time.

The hard bit is afterwards which are the most interesting results and where to go next.

The photo below shows some of the results in the studio.


I then did a montage of them just to see what that would be like. 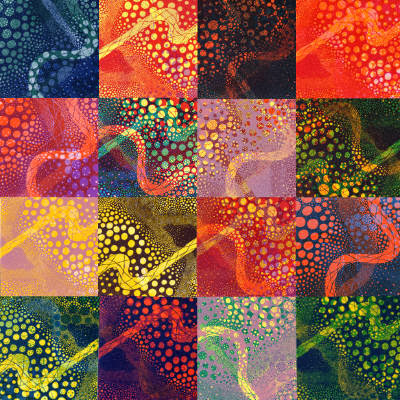 A Visit to Tate Britain


Last week I made a visit to Tate Britain, in particular to see the Patrick Caulfield Exhibition.   This was a review of a selection of his paintings, it was a bit of a shame not to be able to see some of his prints as well alongside.  One of my particular favourites of his works is Pottery which he painted in 1969.

It was one of the works that stood out to me the very first time I visited the Tate on a school trip as a young teenager.  I think in part it was the wonderful amount of colour that he used, but also the composition.  At school we were very much expected to work in a representational way depicting what we saw, rather than just our imagination and a lot of my then black and white visual patterns mimicking Bridget Riley weren’t really considered serious enough.

Here though was an image that was representational but not trying to include every last detail, there was perspective in the drawing but no attempt to use tones to add to the 3D representations.  It did things we weren’t meant to do but was still very clear to see what was happening compared with other abstract or modernist works which at that time were too weird for me.  So minor subversion rather than major rule braking, made it easier to understand what was happening.

After seeing the Patrick Caulfield work I went on to the Gary Hume exhibition.  I have to say that his work is not so much to my taste, there is play with the medium and subjects; however nothing that really fires me.

Then as I was there I went into the current Lowry exhibition.  This was noticeable busier which certainly shows the effect of know names pulling people in.  This exhibition focuses on the industrial elements of Lowry’s work and it is a large exhibition with many of his works.  His work is interesting because of his focus on what was essentially a very unpopular subject amongst painters.  Parallels were drawn between his work and a number of social realists in Europe where this genre was far better accepted than in Britain during his life time.
The nature of the work though does mean a certain lack of joy in the spectacle.  Having seen some of his seascapes at previous exhibitions they talk to me than the industrial scenes and similarly in this exhibition it was some late paintings of the Welsh Industrial Landscape that were more moving than many of the others.

The last item that I saw was Simon Starling’s Phantom Ride the current Tate Britain Commission in the Duveen Gallery.  I often don’t have the patience for video works but this one held my attention throughout as the camera moves around the space you are standing in and passes a range of work that has previously been shown in the gallery, a space first opened in 1937.  A very brief history of space and art and an interesting reflection on place and time.
Posted by Emma at 16:43 No comments: